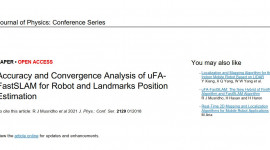 In autonomous mobile robots, Simultaneous Localization and Mapping (SLAM) is a demanding and vital topic. One of two primary solutions of SLAM problem is FastSLAM. In terms of accuracy and convergence, FastSLAM is known to degenerate over time. Previous work has hybridized FastSLAM with a modified Firefly Algorithm (FA), called unranked Firefly Algorithm (uFA), to optimize the accuracy and convergence of the robot and landmarks position estimation. However, it has not shown the performance of the accuracy and convergence. Therefore, this work is done to present both mentioned performances of FastSLAM and uFA-FastSLAM to see which one is better. The result of the experiment shows that uFA-FastSLAM has successfully improved the accuracy (in other words, reduced estimation error) and the convergence consistency of FastSLAM. The proposed uFA-FastSLAM is superior compared to conventional FastSLAM in estimation of landmarks position and robot position with 3.30 percent and 7.83 percent in terms of accuracy model respectively. Furthermore, the proposed uFA-FastSLAM also exhibits better performances compared to FastSLAM in terms of convergence consistency by 93.49 percent and 94.20 percent for estimation of landmarks position and robot position respectively.